This short Lesson Plan will demonstrate the conversion of binary to decimal numbers and vice versa It will use the Kookaberry BinaryNumbers app which requires no peripherals. A 5-bit number is used in this demonstration.

This app needs no peripherals.

Step 2: Running and using the app

Navigate to the BinaryNumbers app and press Button B to run. There  are three modes controlled by successive presses of Button B as follows.

The first screenshot on the left below is the default screen. The user can display the 5-bit binary equivalent of any given decimal number up to 31. The decimal number is selected by using Buttons C & D  – each increment and decrement the decimal number by 1.

Note that a 5-bit binary number can represent 32 different values of any measurement because “0” is a value in binary. 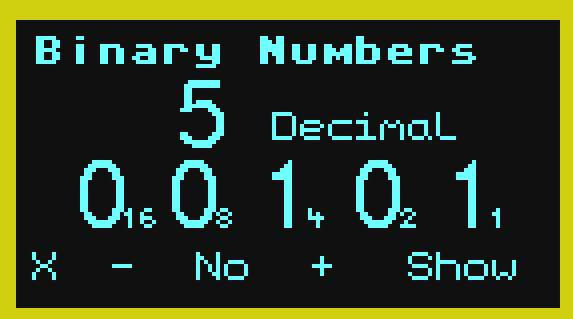