This Tutorial describes PWM and how it’s principles can be demonstrated using the Kookaberry ecosystem.

Specifically, this Tutorial will describe how the speed of a motor or the intensity of an LED is controlled in the digital world.

Our real world is generally an analogue world. Our eyes perceive a continuous range of brightness and colour, and our ears a continuous spectrum and level of sound.

In a totally analogue world (not so very long ago) the speed of a motor, or the volume of a radio, or the dimming of a light, was controlled by continuously varying the power of the source providing the energy. This was often achieved by varying the applied voltage using a potentiometer such as is provided in the Journey Class Kit.

The digital world, on the other hand, doesn’t naturally do continuous….. It only knows two states ON or OFF; High or Low; 1 or 0.

This can be demonstrated by running the Analogue app on the Kookaberry with a potentiometer as an input and a motor or a LED as the output. When the input voltage reaches a threshold level, it triggers an output signal that turns on the LED or a motor. The potentiometer is an analogue input device which adjusts the voltage at the input connector (P4) between Vcc (3.3v) and Ground (0v). The Kookaberry can recognise analogue signals on P4 and converts it to a digital signal by sampling and measuring the instantaneous level at high speed. The circuit that does this is called an Analogue-to-Digital Converter (ADC).

Microcontrollers work at a fixed DC voltage (Vcc) depending upon the design of their integrated circuits. The IC’s in the Kookaberry use a Vcc supply voltage of 3.3 volts. Vcc is also the voltage used to provide power over two wires (Vcc and Ground) to peripherals and cannot be varied.

The current drawn by a peripheral connected to a microcontroller is also a constant determined by Ohm’s Law (Volts=CurrentxResistance).

Dimming a LED, or controlling the speed of a DC motor like the DC Fan supplied in the Class Kit, requires that the power (Volts x Amps) being provided from the Kookaberry is reduced.

How is it possible to reduce power to a peripheral when neither the voltage (Vcc) or the current can be varied?

Simulating “Continuous” in the digital world

It can be demonstrated by running the Dimmer app on the Kookaberry with a potentiometer as an analogue input and a LED as a digital output. If the DC Fan (a motor) is used instead of the LED, then the same PWM process will vary its speed

If the percentage is higher than 50%, the digital signal spends more time in the ON state than the OFF state and vice versa if the duty cycle is less than 50%. Here is a graph that illustrates these three scenarios. They are also the scenarios used in the screenshots above. When PWM is used to dim lights, the frequency of the waveform should be greater than 50Hz so that the eye’s persistence of vision makes it seem that is ON all the time and does not flicker.

This can be demonstrated in the Dimmer app by reducing the frequency of the PWM waveform by pressing Button B. The frequency can be varied in steps from 16Hz to 100Hz. Where is PWM used?

In our increasingly digital world PWM is becoming the predominant process for varying illumination level; speed; and direction and positional control.

The intensity of LED lighting and the LED’s in your TV is controlled by PWM. See the explanation of the process for the RGB LED.

The small DC motors used in model cars and tracked vehicles (such as a Mars Rover), and in robotics, all use PWM to control their speed.

In this case, the duty cycle is not important, as the width of the pulse determines how far the armature of the servo moves. See this explanation from Sparkfun 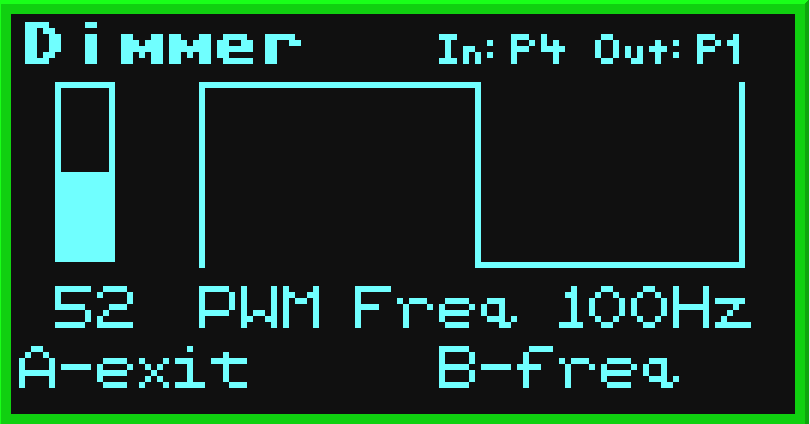