In this resource you will learn how to operate a servo (Resource 1) and use it to make a bush fire risk indicator controlled either by the buttons on the Kookaberry (Resource 2) or by a temperature sensor (Resource 3).

The resources can be used to enhance the understanding of learning outcomes associated with Climate Change Units and Lesson Plans.

The various iterations of code for these resources, together with a pdf of the resources can be downloaded from within the Firerisk zip file in the sidebar to the right.

This plan is targeted at students in years 5&6 (Stage 3) but can be introduced in Stage 3 and as a bridging course between visual and text-based programming languages in Stage 4. This is because KookaBlockly allows students to see the text-based python code behind the blocks.

Bush fires are a feature of life in Australia. Signs indicating the severity of risk are everywhere alongside country roads. Check out this post from the About Regional website.

The risk of a bushfire depends on a number of variables – the main ones being temperature, humidity and wind speed. In Resource 3 we will only be demonstrating temperature.

Before commencing this set of resources, teachers and students should be familiar with the following concepts and technology fundamentals. 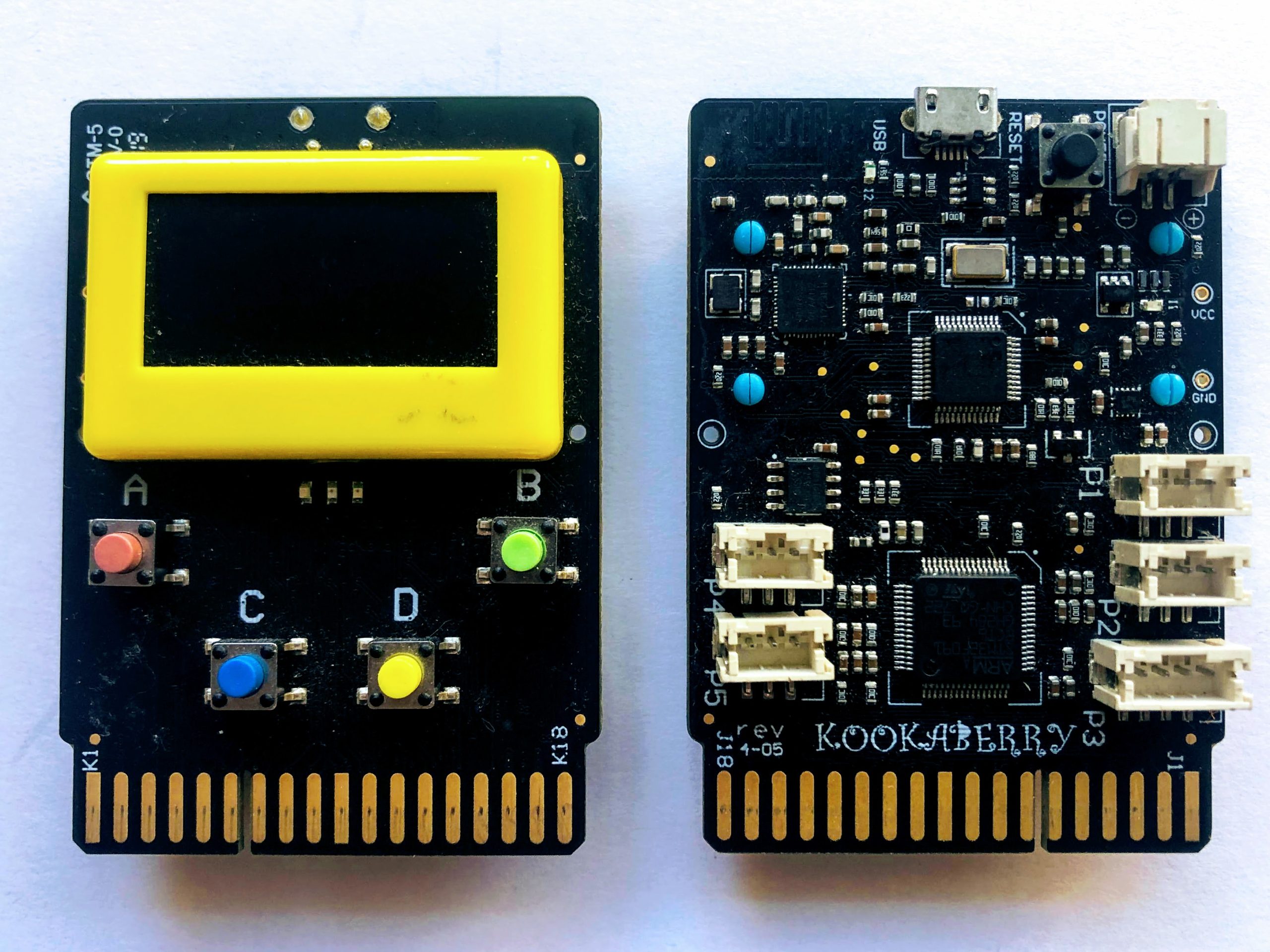 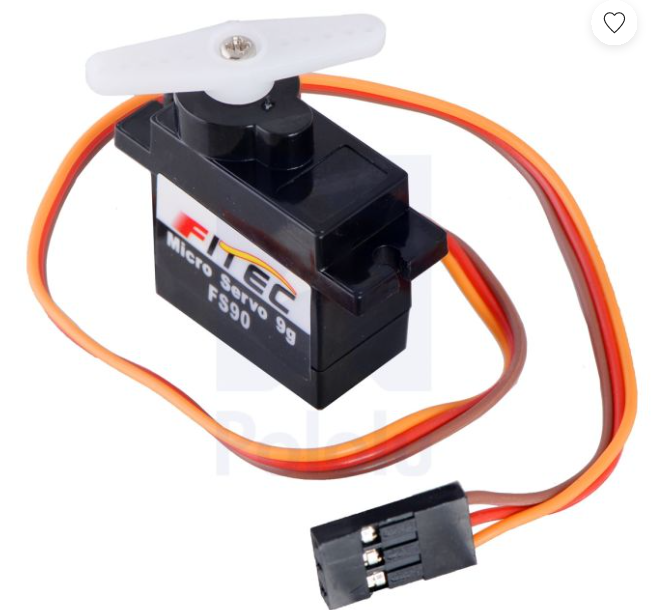 In this resource you will be creating a KookaBlockly programme which will move the indicator pointer between the three segments when a button on the front of the Kookaberry is pressed. The warning will appear in text on the screen and the LED’s will light as well. 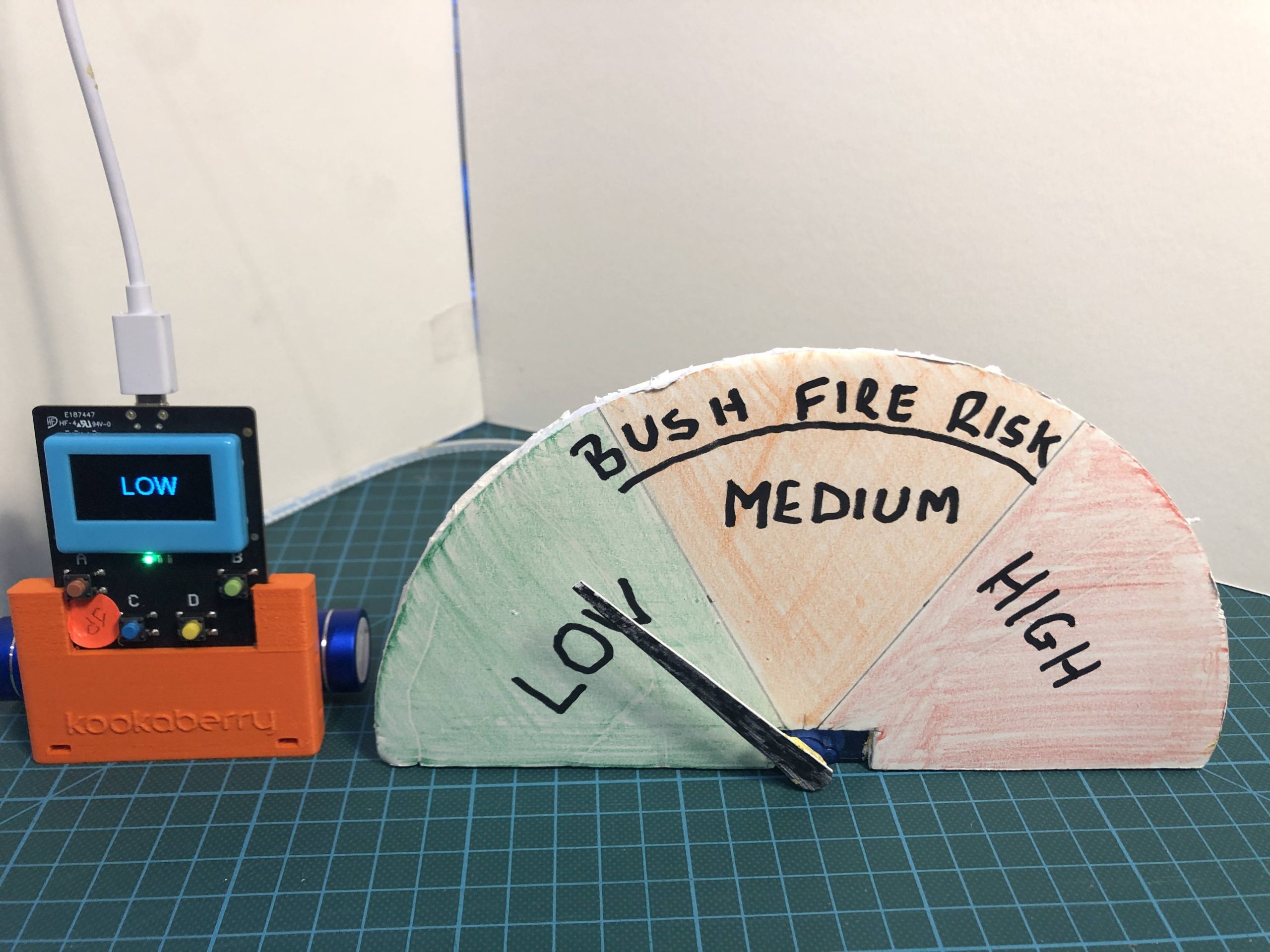 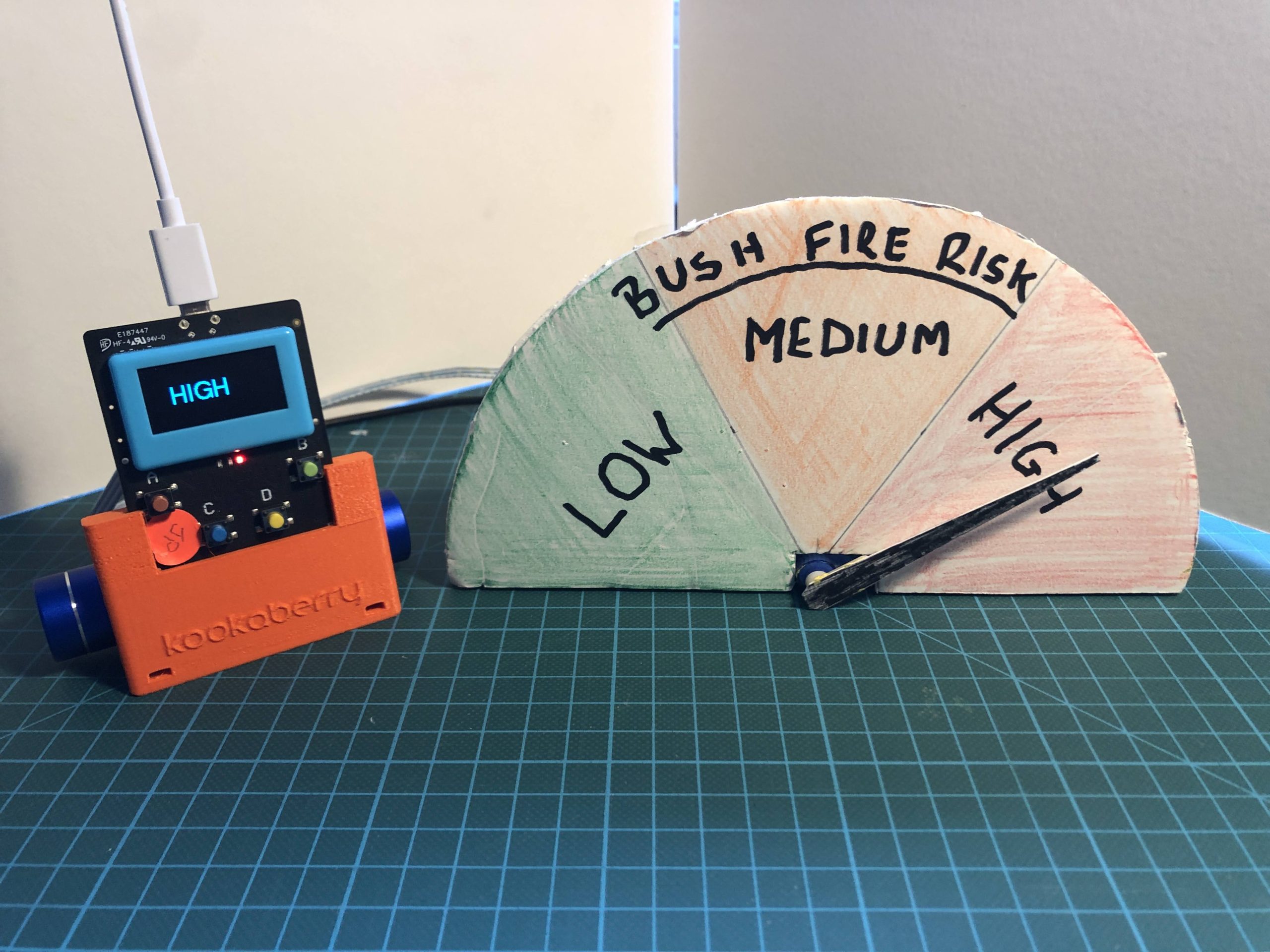 Take an A4 sheet of 5mm Foam Board (available at Officeworks) and cut out a semicircle 200mm in diameter. This will become the the fire risk indicator. Cut a rectangular slot ( 24x14mm) exactly in the middle at the bottom of the semicircle (this is where the micro server will sit). Now cut out  a triangular piece of stiff (600 gsm) card to glue onto the back. Cut a small angle out of the bottom of the card to allow the indicator to lean back when placed on a flat surface.

Divide the semicircle into three equal 60 degree parts using a protractor, and colour and mark the indictor as shown in the photos below.

Cut out pointer from the 600gsm card and secure the micro server in place with BluTack. Stick the pointer to the single plastic servo arm and push it onto the servo. This is a temporary position. It will be adjusted later.

Templates can be downloaded from the sidebar to the right. 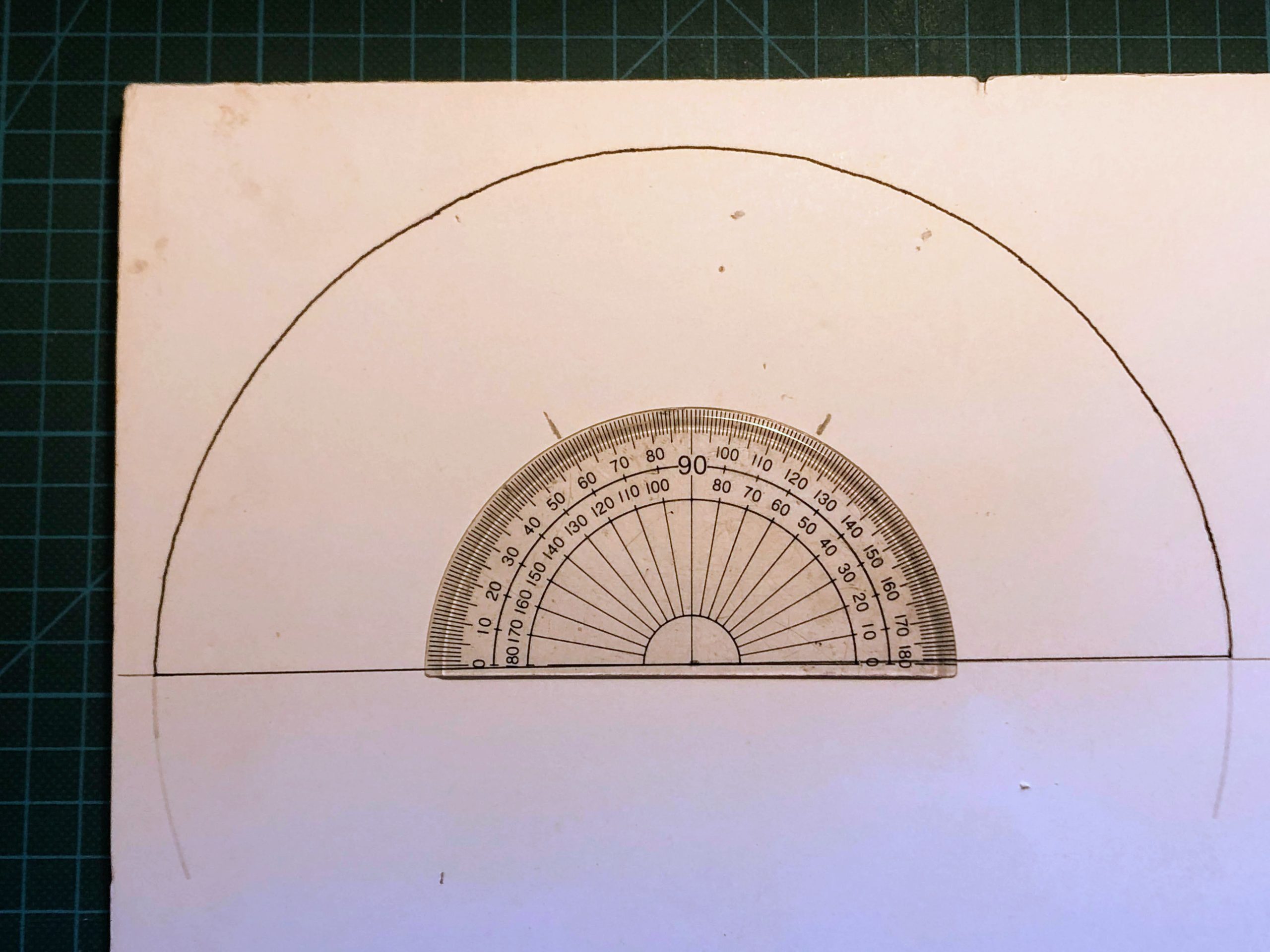 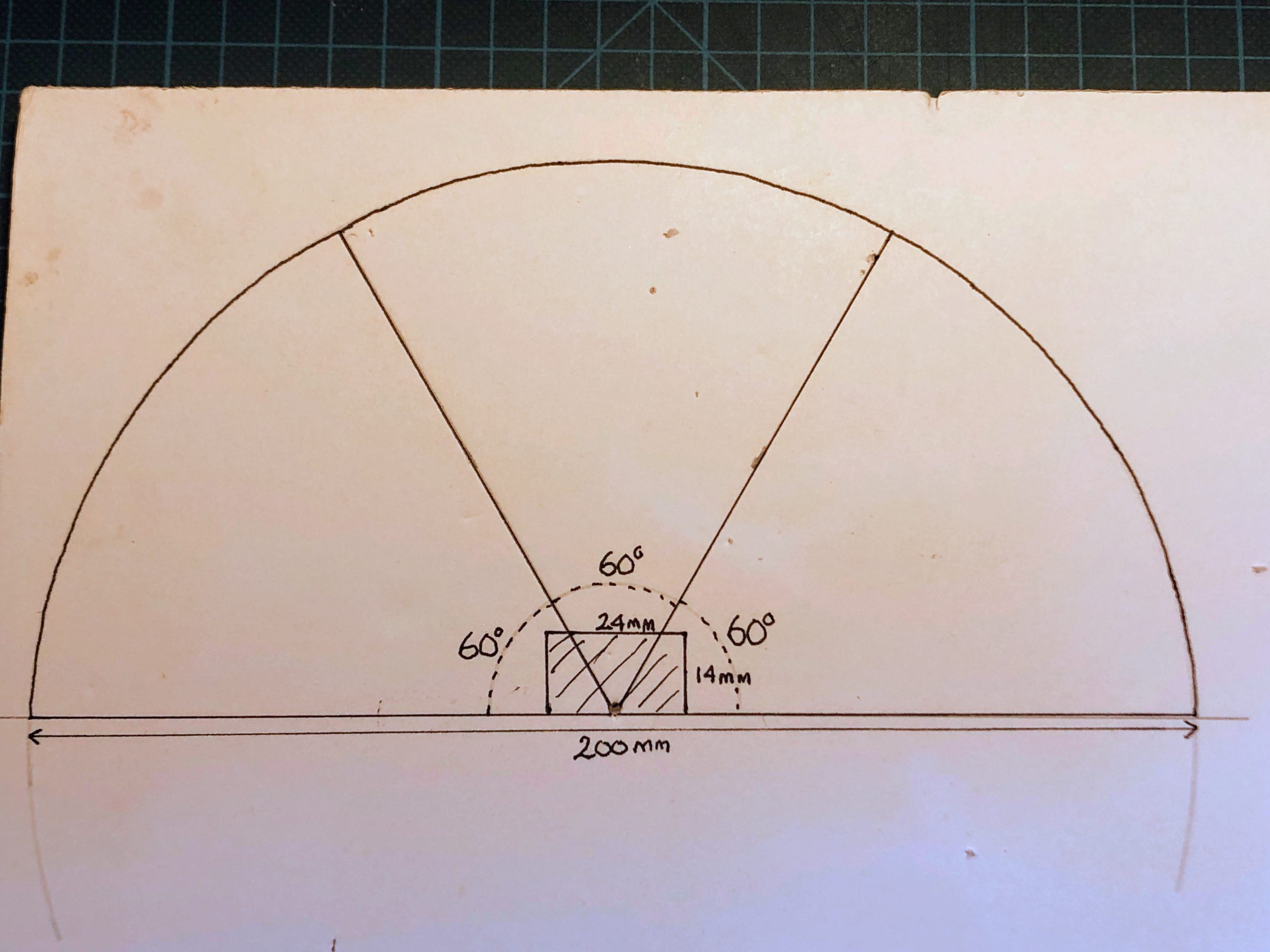 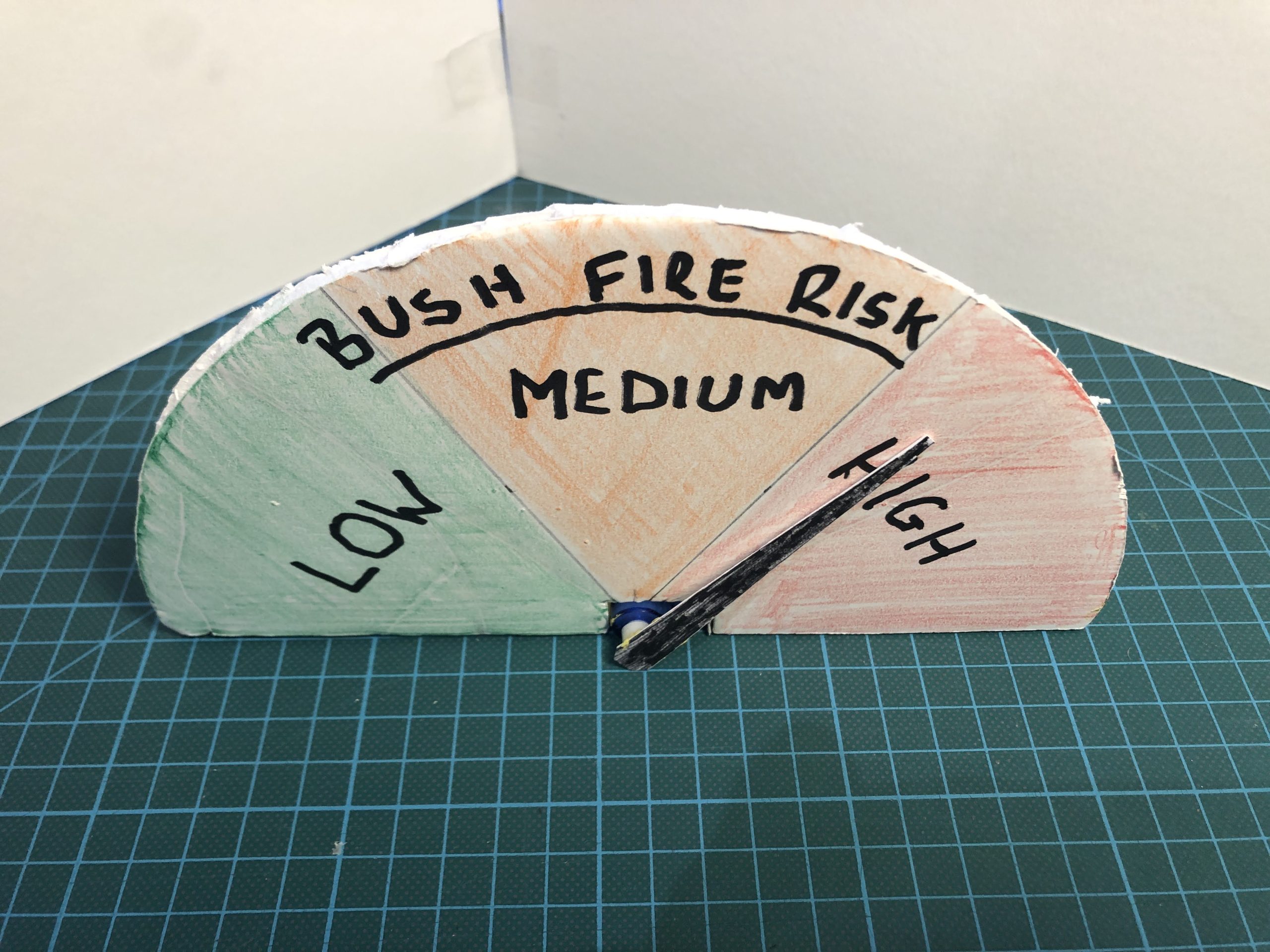 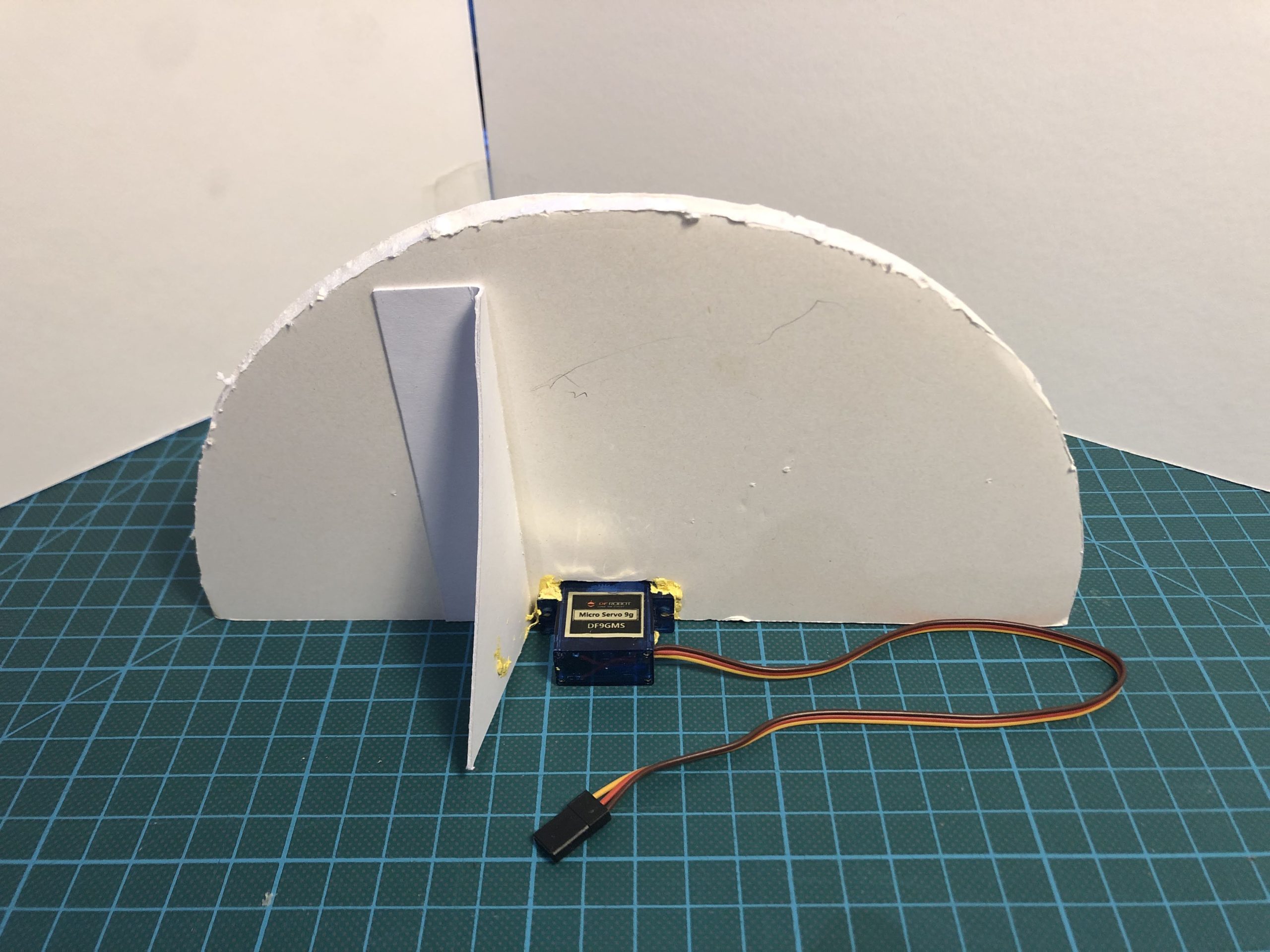 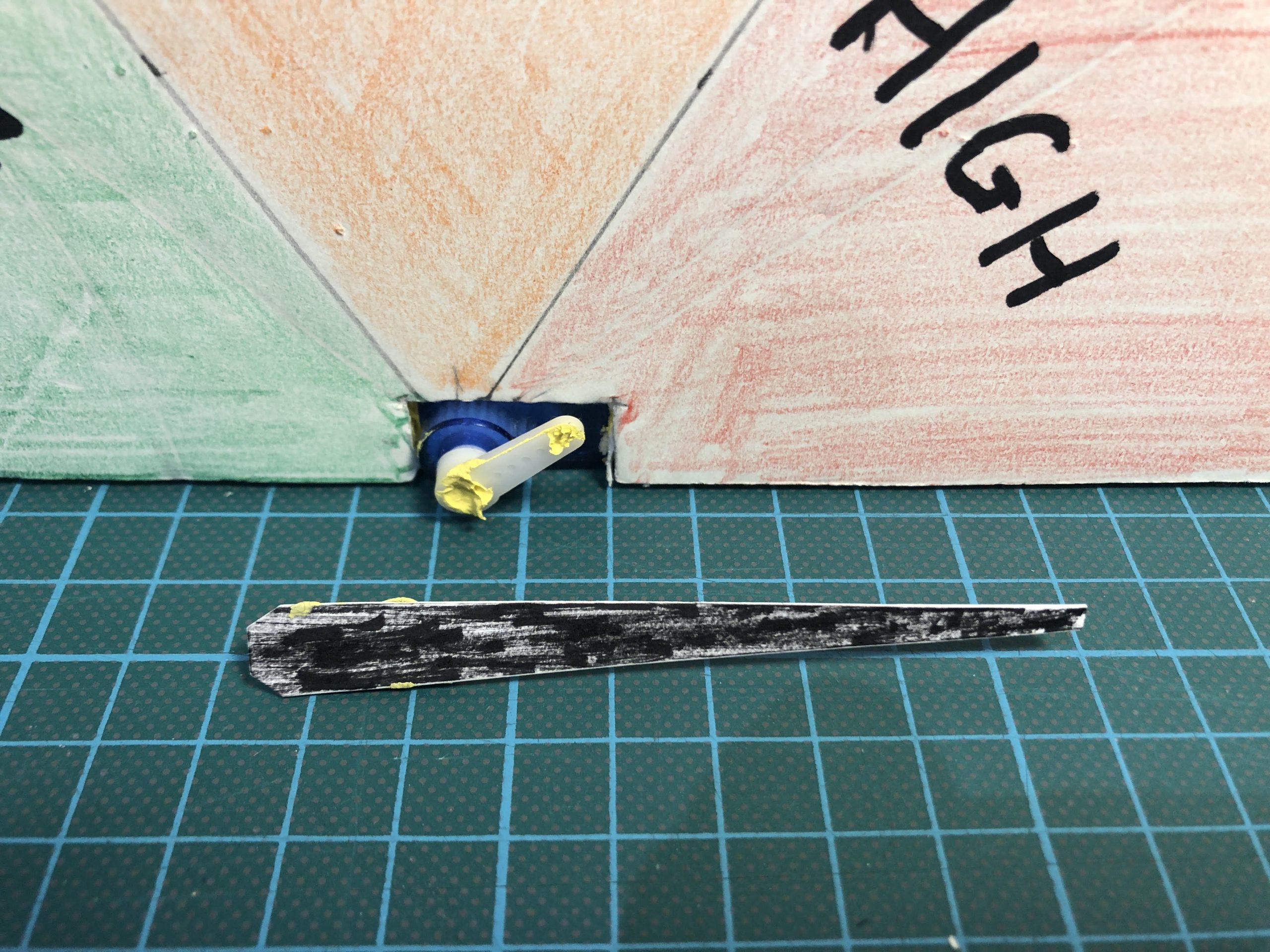 Connect the Kookaberry to a PC or Mac running KookaBlockly and the micro server to P1. Run KookaBlockly and ensure that you have a blank canvas by pressing the “New: button at top left of the window.

First you will create a programme to show instructions onscreen as shown below. Run the programme to check size and placement of text on screen. Use the blocks from the Display menu. 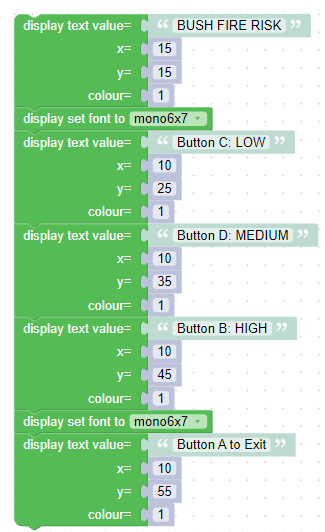 Now create the programme for placing the needle on the correct part of the indicator when the correct button is pressed. You will need blocks from the

Create the code for each warning one at a time [Tip: Right click on the first if-do block and a dropdown menu will appear which will allow you to duplicate the block. You can then change the parameters for buttons and LED.] 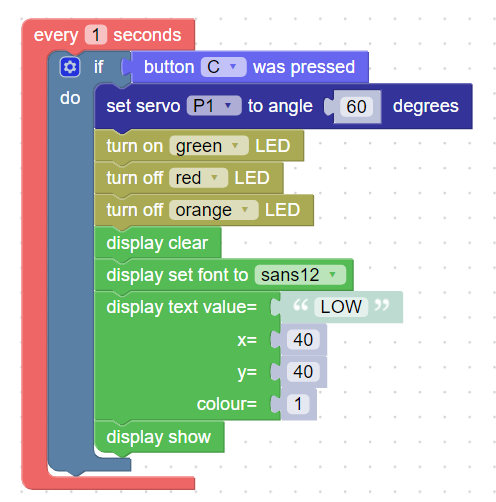 Adjusting the pointer on the indicator

Run the programme and press Button D to indicate Medium Risk. The servo arm will now be at 90 degrees to the table and pointing upward. Adjust the pointer (stuck to the arm with Blue Tack) to also point vertically upwards.

Button A to Exit 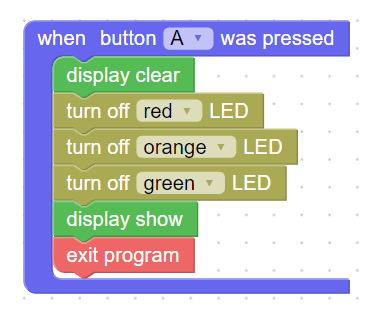 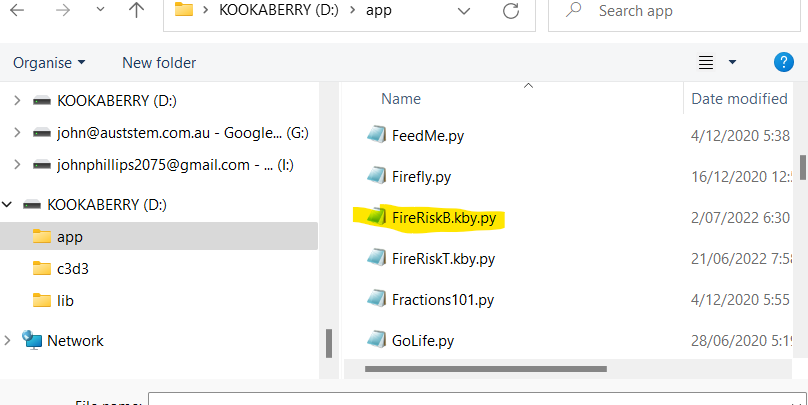 Find the saved programme on the Kookaberry menu and run it using Buttons C, D, and B to move the indicator to the required warning

In this resource you will add a temperature sensor (DS18B20) which will drive the servo so that the risk warning matches the temperature. You will need a hair dryer to increase the temperature and operate the indicator.

For this example, the temperature ranges are 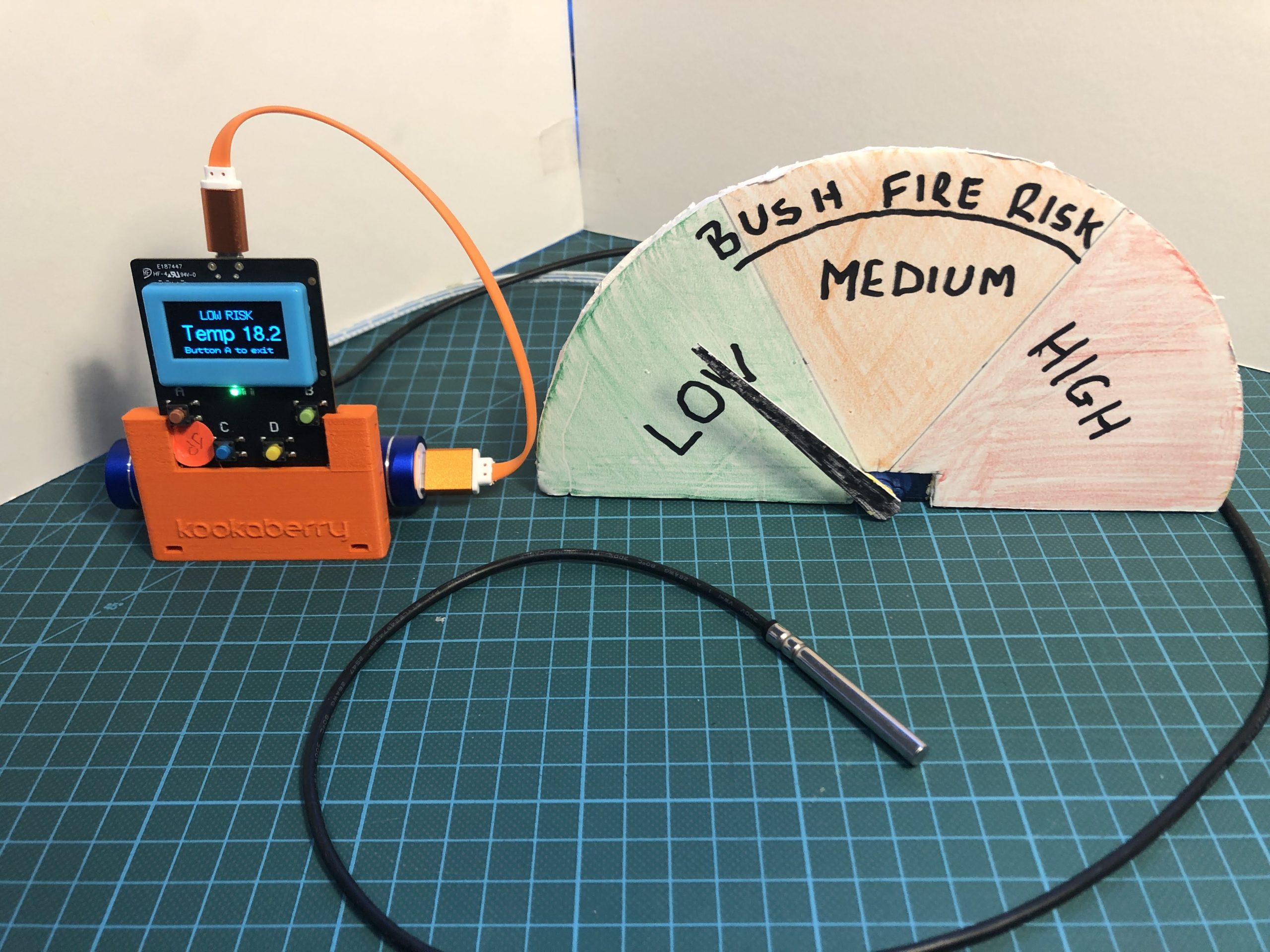 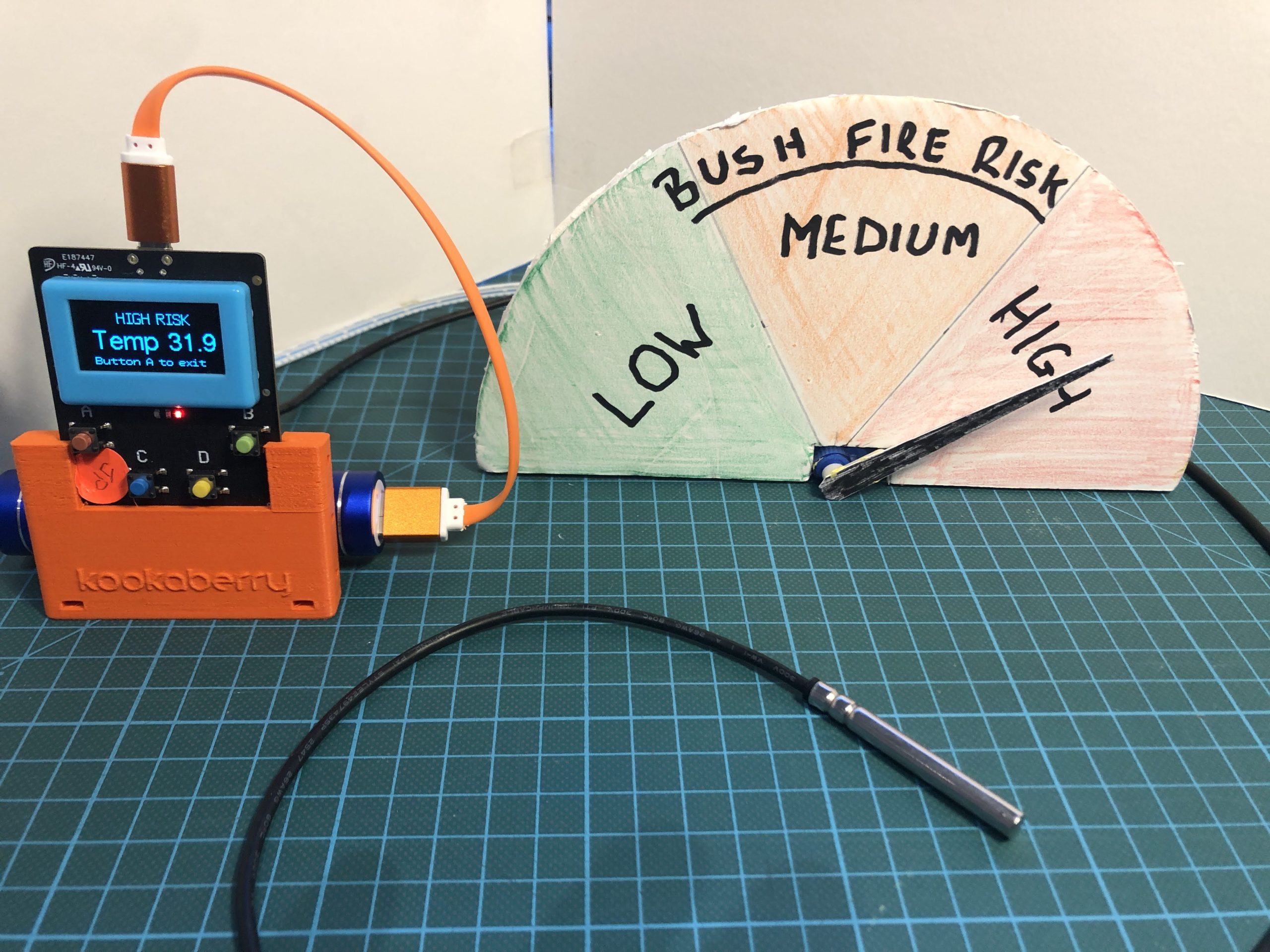 Adding the code for the DS18B20 sensor

Another temperature variable is needed because the first one (Temp) has already been set as a string. Create a new variable called Temp2 and set it to read the temperature from the DS18B20 sensor on P1.

Now use the If-Do statement to create the temperature conditions required to both control the servo and print the warning on the screen. Start with just one (Low Risk) and duplicate to create the other two. Remember to add a control loop.

Also add “Button A to Exit to the screen instructions. Remember to reduce the font size. 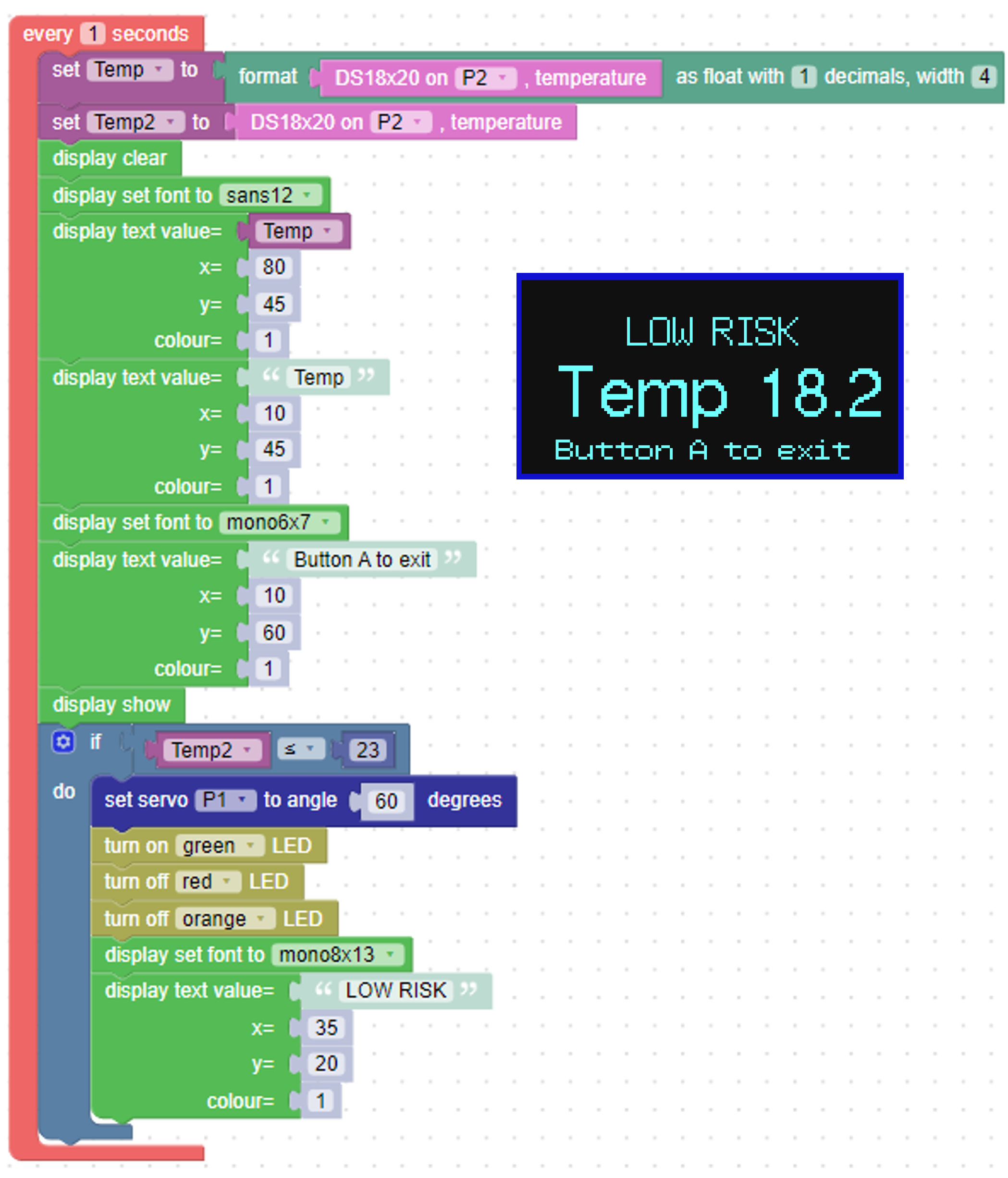 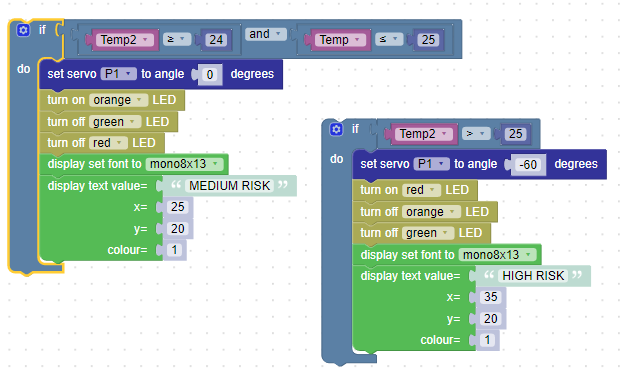 Add the code to allow Button A to be used to Exit programme and save your programme – which should look like this. 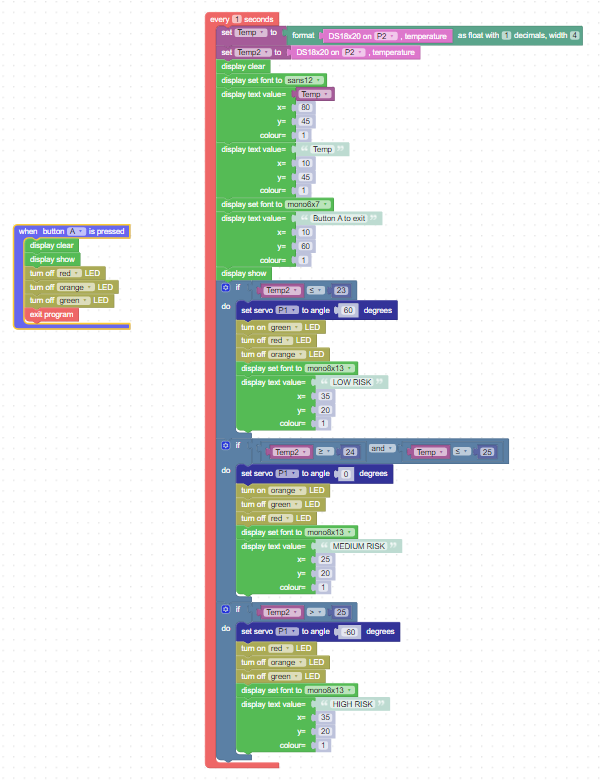 The ability of KookaBlockly to show the MicroPython script behind the blocks and to access the debugging editor associated with the onboard MicroPython code compiler allows a user to debug a KookaBlockly programme in real time. This is an example…

Suppose that you made an error whilst coding the MEDIUM RISK If-Do statement in Resource 3. You are working with two temperature variables – one a string (Temp) and one an object (Temp2) – and you mix them up when defining the temperature range as shown below 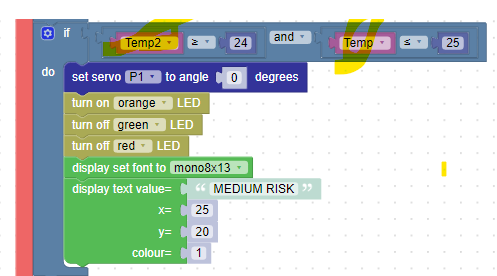 Make sure that the Kookaberry is still connected to a PC or Mac running KookaBlockly when you are creating and debugging your programmes.

When the temperature of the sensor is raised (use a hair dryer) above 24 degrees, and the MEDIUM RISK conditions are met, the programme stops and the following code error message appears in the KookaBlockly window. It indicates a string/object conversion error on line 40 of the underlying MicroPython code.

Click in the Show script box at the top right of the screen and expand to full page where you will see that Line 40 contains both the Temp2 and Temp variables It should only contain the one Temp2 variable.

Return to the KookaBlockly window by exiting the script page and correct your programme. You will need to disconnect and reconnect your Kookaberry after you have made the change. 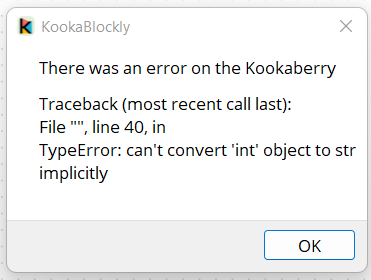 Peripherals used in this learning plan