This demonstrates the conversion of an analogue to a digital signal; its display as a histogram; and the generation of a control signal when a threshold signal value is reached.

Plug a potentiometer into P4 and a LED into P2 using the 3-wire leads.

Navigate to the Analogue app and press Button B to run Step 3: Using the app to turn a light on when a threshold is reached

Turn the potentiometer to vary the analogue input level at P4 In the screenshots above,

The input can be any compatible analogue input such as a potentiometer, light sensor, hygrometer, sound sensor etc.

The output can be any compatible digital on/off device such as an LED, motor, buzzer etc.

The potentiometer is an analogue input device which adjusts the voltage at the input connector (P4) between Vcc (3.3v) and Ground (0v). The Kookaberry can recognise analogue signals on P4, and converts the analogue to a quantised digital signal by sampling and measuring the instantaneous level at high speed. The circuit that does this is called an Analogue-to-Digital Converter (ADC).

The digital value of the level of the input analogue signal is displayed on the screen as a vertical bar (a histogram).

When the input signal level is at, or beyond, the threshold level, output P2 is turned ON. This means that the voltage level at P2 is raised from ground (0v) to the Kookaberry’s working voltage (Vcc) of 3.3v. In other words, from a digital 0 to a digital 1. 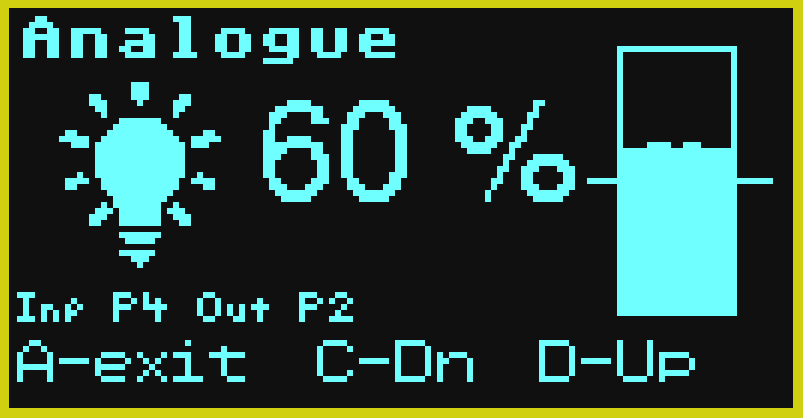