This App demonstrates the operation of a burglar alarm. When it detects a digital input for more than a user-set time it sends a digital output to activate an alarm

It incorporates an arming mechanism to avoid it going off during setup and a delay after reset to provide more alarm activation time.

This app has been designed to simulate a common burglar alarm similar to those which switch on the lights outside a house when an object is detected moving slowly. The sensor used in this context would be a Passive Infrared (PIR) motion detector.

However, the use of a PIR sensor is not recommended for group class activity as it requires perfect stillness in its setup process and activates at the slightest motion.

The output peripheral used to illustrate the operation of this App is therefore a crash sensor which incorporates a simple ON/OFF microswitch.

The INPUT peripheral used in this example is a Crash Sensor and the OUTPUT peripheral is an LED. A Push Button and a Buzzer can also be used. Navigate to the Alarm app and press Button B to run Because the crash sensor is ON in the idle state, the horizontal bar is filled in and the alarm icon is showing. However, because it is not yet armed, the alarm is not activated and the LED remains unlit.

Step 3: Using the app to protect an object on a pedestal

Position the crash sensor so that an object placed on a pedestal holds its arm down. When the object is taken away, the arm will be released and an ON signal sent to P1 on the Kookaberry. To make the alarm operational, place the object on the pedestal. The horizontal bar will empty and the alarm icon will disappear. Next, press Button B to arm the alarm and the next screen will appear. See screen shots below Now take the object off the pedestal for less than half a second (or less than the duration set with Buttons C and D) and watch the bar fill up but not quite reach the end. The alarm will not activate.

Now lift the lid up completely. The bar will fill up; the “burglar” alarm icon will appear; and the LED will light up. Two other display items have also appeared – a bell to indicate that a signal has been sent to an external peripheral (the LED in this case but it could be a buzzer) and the number 5. This is the number of seconds that the the LED will remain lit after the alarm has been reset by closing the lid (see next section).

Close the lid of the box and the alarm will reset. The LED will remain activated for 5 seconds until the seconds have counted down to zero.

Why are activation delays needed?

In a burglar alarm (rather than the simple open-and-close example used here) the sensor triggers when it detects the motion of an object within its range of operation. If it is a small object like a bird which moves rapidly, then the trigger delay will prevent it activating. The trigger time can be adjusted to ensure that only slow moving objects trigger the alarm.

Alarm delay in switching off after reset

If a slowly moving large object (like a burglar) is detected, the alarm will trigger and stay activated for a period (5 seconds in this case) even after the object has moved away and the alarm has reset. This provides a house owner with more activated alarm time to react. 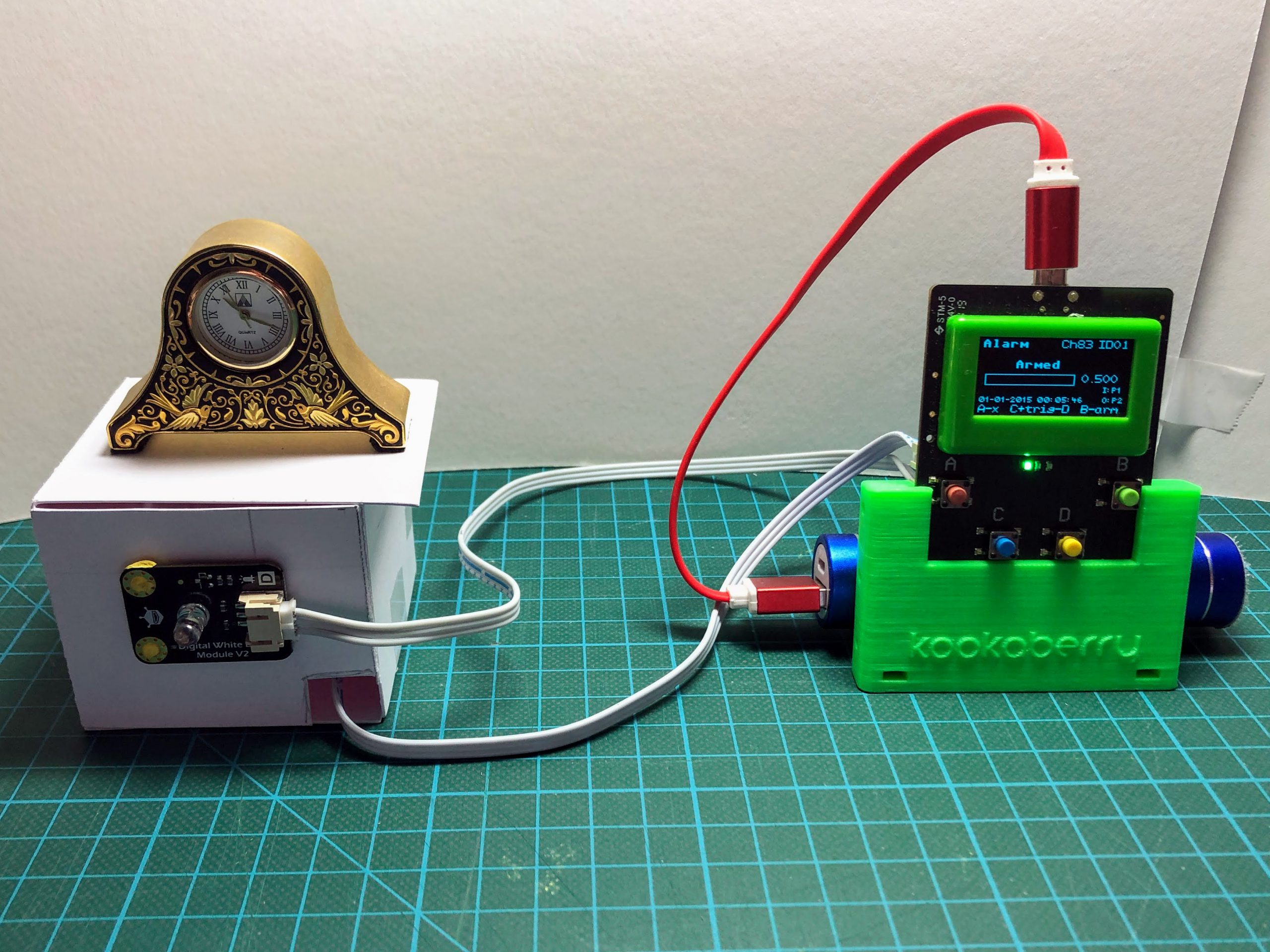